The Twomeys Experiment – Day 2, An exercise in Colon Control.

So on the weekend I started the twomeys experiment, beginning with a 5km benchmark run, the colon cleanse yesterday and following up with a 5km run today.

And I have to admit there have been a few surprises to come out of this experiment so far that I think are worth noting.

Gerrard certainly wasn’t joking when he said the colon cleanse would clean me out. Yikes!

I started my sunday by putting the herbs in a few ounces of water thinking, ‘a few gulps and I’ll be on my way to inner cleansing!’ And much to the amusement of my boyfriend, about 12 small sips later and a few dry reaches I was really struggling to get them down. Not only did they taste vile, but mixed in with a bit of water and they resembled something like the sludgy brown aftermath of a colon cleanse and my brain was telling me this was not neccesarily something that should be going in my mouth! But never one to be deterred by taste and wanting to remain dedicated to the cause, I persevered, and even added a little chamomile tea to soften the horrible taste. Eventually I got it all down with only a small amount I just couldn’t bare to stomach. So next it was off to breakfast I went. I felt good, a little bit dizzy, but I put this down to going for breakfast a bit later than usual.

I sat at Casa Biachi waiting for my poached eggs and toast and had a healthy beetroot//carrot/celery juice smoothie while waiting. Then as soon as my food arrived I scoffed it down quickly. I felt relatively good after having eaten and so a small car trip out to Kalamunda seemed doable. Besides, it had been a few hours or so and it didn’t seem like these herbs were really affecting me at all yet so I thought I would be ok.

…….15 minutes later and I was clutching at my stomach twisting itself in pain, causing me to break out in a feverish sweat. All of a sudden I was horrifyingly 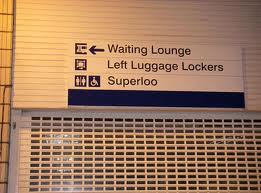 Thank god for that superloo!

uncomfortable feeling like I had some kind of third world food poisoning to the nth degree but a less backside-ish and more internal kind of feeling.

I was sitting next to my boyfriend in the confined space of his car (which seemed to quickly be getting smaller) when it happened, trying embarrassingly to keep myself under control and not look like I was about to birth the spawn of satan from my intestines which is what it felt like was happening. I was trying to stay calm and collected when really all I wanted to do was exit the car immediately make a mad dash towards the closest bushes and let everything go, then ultimately find a quiet place to just lay down and die so I’d never have to face the humiliation of seeing him look at me knowing what had just happened ever again. But instead, I resorted to rubbing my tummy gently and tapping my feet on the floor impatiently looking out the window away from him (so he couldn’t see my pained expression). Silently I was cursing like a trooper at the red light we’d just encountered, but I tried to keep it hidden and focus on deep breathe to stop from exploding, quietly counting down the seconds until the light turned green so we could make the turn into the service station and I could reach a public bathroom hopefully with some small shred of dignity intact.

So I made it, and it happened. Lots.

Like never before… and it wasn’t just restricted to the back end, yes folks, normally I’m a camel but this day, I did have a case of the wee wees.

In conclusion my cleanse resulted in four toilet stops in one hour and even though my stomach felt like it was being ripped out at times, thank god I made it to the bathrooms when I did or it might have been much more painful experience.

And thank god for my boyfriend putting up with me having to stop a gazzilion times on what turned into a pretty long car trip. It certainly takes a special kinda guy not to take off in a puff of gravel dust at the slightest inkling of a seemingly never ending car trip with a incontinent Linda Blair from the Exorcist.

Another thing I learnt:

2. Urine can be funny colours without you having an STD.

Yes, I only noticed on the 5th time I went for a wee that my urine was a funny reddish brown colour. Now I’ve never had an STD, but I have had my wee go yellow from vitamins and berocca, but I’ve never had it looking like it’s got blood in it! So much so that I actually wondered if I had something else wrong with me. I’m sure it was just the cleanse but just for a second I did have a moment of panic.

Reporting today, 24 hours later it seems it has cleared. Urine is back to normal. Phew!

3. My body now seems to be rejecting my normal deoderant

Today, sans cleanse, I went for my run and noticed that after starting to sweat my usual rexona antiperspirant started coagulating in a horrible white foam under my arms. Now for anyone that doesn’t know me I’m not a huge sweater, so this came as a bit of a surprise that I had these little clumps of white foam stuck to me after just 20 minutes of running. It seemed bizarre but someone else has suggested that my body is rejecting it as some kind of toxin now I’ve done the cleanse. The truth?! Who knows!? This will be something I endeavour to ask Gerry about when I see him next.