Home » Events » The 3am Strip Show

The 3am Strip Show

Posted by Fitmidget on October 8, 2013 in Events | Leave a comment

So it was 3:30am and we were all awake bustling around in the tent getting our running gear together. 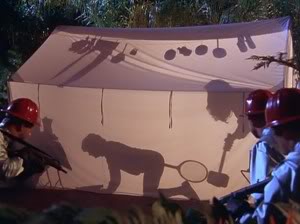 When camping, beware of unfortunate silhouettes projected onto the tent by your camping lantern

It was only when Karen made the cheeky comment, “Look Jamie’s putting on a show for us” that I realised my amazingly bright camping lantern was casting a full body silhouette on the tent internal walls for all to see as I slipped out the ‘Lucky Jersey’ off over my head. Meanwhile I started singing some terribly rambunctious stripping music and we all shared a laugh as I then fumbled around struggling to get into my running shirt and shorts.

Once I was adequately clothed and attached my race bib (Lucky number 15) I immediately took off to heat up my porridge in the camp microwave. The microwave was painfully slow and at one point even stopped working so I gave up and accepted I would be eating half-cooked oats and coated them with oodles of honey to make myself feel better.

Arriving back at the tent it seemed everyone was pretty much ready to go, seated in camping chairs we were all chowing down on something and exchanged a little bit of general banter about last-minute racing stuff before heading to the main camping office to meet the bus.

By now I couldn’t help but feel slightly discouraged by the two-hour waiting time from getting on the bus to actually starting the race. I had brought a Gatorade and a few things to nibble on if I felt like it but my personal aim was to try to keep myself calm. I predicted that the 2 hours would give my pre race nerves plenty of time to sneak up on me and I knew I would do no other runners favours by talking about it, so in went the earphones and on went the ipod.

Some of the Special Bus Runners approx. 4am

The music was great. I had put together a playlist for my run and this helped me to find and maintain inner peace while the bus was moving along. I did not want to get hyped up, as it was a long run and there’d be plenty of time for that later. But through the tunes of Cake, Reef and a few other mellow rock tunes I could close my eyes and visualise a serene situation of beaches, warmth, and sunshine. My planned Bali trip in 3 weeks time that I had planned as a treat to myself and for my mum’s 60th Birthday. Ooooh yeah.

The bus halted to a stop and my little Bali dream bubble quickly vanished. My current state of being was nothing like I had just been envisioning. It was cold, stiff, and those little nerves were starting to claw their way up my tummy like leeches. To kill some time, some of us decided it’d be a good idea to walk to the toilets and try for a last-minute calorie offload before race time. I sat for a while with no result. Bummer, I always feel better if I could go knowing I then wouldn’t be interrupted later while I was on the move.

Nevermind, I’m sure I wasn’t the only one I thought and back to the start line we walked. The sky was lightening now and with the rising sun, the nerve leeches also were rising higher in my oesophagus. We all had our mandatory gear and names checked off as more and more runners started to arrive. With 20 minutes still left to wait, the phone cameras started to come out as we all decided it’d be a good opportunity to take photos.

Karen and I had a couple of photos and I found acceptance in the feeling that I had finally arrived at my immediate destination with only 81.5kms left to go before a well deserved rest. It was approaching go time and I felt complete in knowing I had done all the hard work that could be done to get me through what was ahead, so all that was left was to do my best and try to enjoy the moment.

There was a small explanation from a race marshall that we would be instructed by phone when to start and that a clock would be started at the finish line to keep record of our times. He held his phone up as everyone made last-minute checks of their hydration and equipment before getting ready to start. We all listened carefully as someone on the other end counted, 3, 2, 1, GO!

The leeches were in my mouth now as I started a jog ahead in the direction of the first flour arrow. ‘Stay calm’ I thought in attempt to still the leeches and butterflies to no avail. I needed to find a rhythm and settle in for the long haul and not get ahead of myself as I often did in previous runs especially if I got caught up in the race dynamics early on in a run. It didn’t matter, I needed to run my own race now more than ever.

We all turned a few bends and weaved our way along the trail and I found myself keeping pace with the one runner I knew I would be closest to in pace. Previously I had been beaten by her when I burnt out in my last ultra and so I knew I had to run differently if I wanted to stay in this one. I politely chatted for a bit then deliberately dropped back off to save my breath for when I would need it more knowing that now was far too early.

Now we were a few kms in and the field was spread out, I took this opportunity to plop in my ipod earphones and use the music to settle into a consistent pace. Again I was flooded with the songs of slow rock music pit patting my feet away as I looked across the landscape and tried to take in the countryside views. ‘Dwellingup really is a beautiful place’ I thought as I ran with beautiful green rolling hills spanning on my right. I might like to visit again one day, one day when I am able to enjoy it a little more.