Home » Events » Dealing with my worst ultra marathon ever 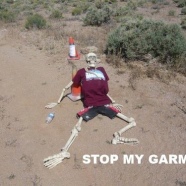 Dealing with my worst ultra marathon ever

Posted by Fitmidget on December 19, 2013 in Events, Fitness, Uncategorized | 1 Comment

So, here I stand at the end of a big year..having completed it by running an absolute disaster of a race.

Yes my last Ultra for the year saw me finish in my worst time ever and I have to say, it’s left a bit of a bad taste in my mouth.

Just last Sunday I was all fuelled up, ready to go waiting at the 6 Inch Marathon startline just out of Dwellingup feeling confident. Although my preparation had been somewhat casual, I trusted in my last race experience to be able to run at least a reasonable time of about 5 hours for the 46.8 km race……….  Little did I know what was to happen.

The race was a brutal start at 4:30am with a tedious 3km incline, followed by some windy single track and largely open pea gravel stretches that felt like they took forever to run. The weather also seemed to quickly heat up reaching a scorching top of around 38 degrees which certainly didn’t help on the long stretches with no shade.

Now don’t get me wrong, all in all my time was 5hrs 29min which was still pretty good. But my expectations going into it were that if I were to struggle, it would be because of the heat, or the course, or some other ‘unknown’ and not something to do with my physical state like, lactic acid, joint niggles or muscle fatigue. Besides, I trained hard in the gym, and had previous races under my belt, so it wasn’t like I was a newbie.

Perhaps therein lies my first mistake, I had not recently been running as much as normal, and in my training I had neglected to train with my running coach, instead opting for a ‘I’ll give it a go by myself approach’. I also dropped my usual electro training (used to largely strengthen the core), and my fish oil intake had also largely decreased in the two weeks leading up simply from my laziness to get to the store and purchase some more. Big Rookie mistake.

As the story goes by 20kms, I was feeling it. My knees were sore from fanging the downhills trying to make up time for my uphill struggles, my body was niggly and my lack of respect for preparing my body properly showed, and my psyche felt it too. I was down and out and quickly the negative thoughts started flooding in. Soon I was texting my support crew, with things like, ‘I’m on struggle street’, and ‘pls can u hav the anti inflammes ready!’ And it became obvious to me that mentally I needed to try to turn this around before I sabotaged my whole race.

A quick evaluation of my fuelling showed everything was pretty normal so I resigned to trying to turn my thinking around to make it to the 34km aid station where I would evaluate from there.

What could I think of that was positive?… immediately Dory from ‘Finding Nemo’ popped in my head and I half heartedly started to chant her ‘Just keep swimming’ motto over and over in my head turning the ‘swimming’, into ‘jogging’ and that gladly passed the time as I dragged myself along. As the minutes passed my words seemed to gain enthusiasm and mentally it became a stronger thought in my mind as I kept on chanting now out loud as I stepped. Then before I knew it I was at the aid station. Thank god!!!

With my lovely support crew looking after me (Saviour Luke in a white flat peak) I rested for what felt like 10 minutes or so to eventually come around to the idea I would not DNF, and that I would continue to finish the race regardless of my finishing time. And I did, all be it a little slower, walking and jogging, to cross the line in 5 hours and 29 minutes, 30 minutes slower than I had anticipated.

So now, where does that leave me….?

A couple of thoughts upon completion of my worst Ultra Marathon experience:

1. Dory was right, and in my moment of struggle her motto repeated over and over out loud to myself really does work to empower the body and mind when you seem to be heading into ‘Did Not Finish’ territory. The mental game is very real, and I’m probably better at it than I sometimes think.

2. Mentally having a support crew or familiar face is helpful, and a very very welcomed distraction when your not coping with the demands of the race well. Mentally its a running self-esteem booster.

3. I would like to get back into my electro core training to feel strong again and to prevent niggles. Without it I felt like my limbs were flailing around like spaghetti and consequently put more pressure on my joints when I was running tired.

4. I run better with a coach, and running program to follow. I perform better when I am accountable to someone else other than myself during training, and overall that gives me greater self satisfaction when it comes to performance in a race.

5. Always carry wet wipes in your pack. Sanja I’m sorry I laughed at you when I saw them in your pack, and thank you kindly for giving me some when I needed them for a loo stop. I owe you!!!

6. This is not as terrible as it is. It’s not a disaster, and it was bound to happen. I am not a worse runner for it. In fact this makes me better. And trying again means another chance to improve.

← The 3am Strip Show The Twomeys Experiment – The Plan →