Home » Events » Stay Puft – The tale of a ghostbusting adventure and neverending sand! 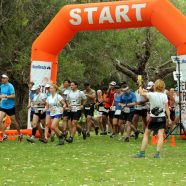 Stay Puft – The tale of a ghostbusting adventure and neverending sand!

Posted by Fitmidget on January 14, 2013 in Events | Leave a comment

Sunday the 13th of January, unlucky number for the superstitious for exciting for me as this was to be the first race of the Perth Trail Summer Series!

The Perth Trail series is a collection of 5 short but challenging trail races in the hills surrounding Perth with both Short and Long course options. The short usually range anywhere from 8 to 12kms and the long anywhere from 10 upto 25kms.

Stay Puft is a course that takes participants deep into the sandy Yanchep National Park partly following the old ghost house trail before an out and back loop of around 7 kms, and then a stretch of sand with rocky parts and a km of bitumen/footpath to finish. The trail used to go past a real ghost house, and the name ‘Stay Puft’ therefore is derived from cult classic ‘Ghostbusters’ which also happens to be my all time favourite movie. Knowing that, there was no way I wasn’t doing this race, especially since I had missed it last year.

I had also only done the short courses year and so it was time for me to step up and for Stay Puft that meant around 18.5kms.

By all accounts everyone last year had complained of never-ending sand, so I went into the race knowing full well I’d better have my legs (or calves specifically) in tip top condition and ready for a flogging. But I was not as prepared for the scrub or full amount of sand I would be facing. 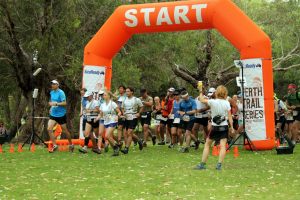 Around 7:30am, the starting bell rang and the long course runners set out. I positioned myself in the middle of the pack for now starting slow to warm up, knowing that the group will spread out a bit usually within the first 3-4kms.

The trail started out as a single track, windy and narrow and with bushes on each side. My gaiters protected me from sand getting into my shoes but I could still feel the damp stuff flicking up as I jogged along. By 1.5 km mark the trail widened a bit and allowed me my first opportunity to move up a few places. This meant I was at the front of the middle of the pack with the faster front runners out of sight ahead. But this was a positive thing for me, and I was happy I was in a good spot, now it was just a matter of keeping it and distracting my mind to pass away the minutes.

This run for me also marked an occasion where for the first time I wore a heart rate monitor to try to gain an understanding of my pacing, and intensity. It was good really because this would be something I need to become aware of to achieve my goal of completing my first ultra marathon this year.

So with the heart rate monitor being my distraction along with music blaring in my ears from my Ipod the km’s seemed to fly by and before I knew I was starting the out and back 7km loop section in the middle. So far the sand hadn’t been an issue, as most of it had been fairly compacted with the previous days rain but on a now slowly increasing elevation it was loose and getting tiresome. The bushes on this wider track were well overgrown so between dodging other runners coming the opposite way, and getting scraped up darting through prickle bushes I have to admit it was starting to getting frustrating.

But nevertheless I focused on my music and trying to keep my heart rate down in between waving and smiling at my competitors running past and before long and a few bloody scratches later I was at the turnaround point. Thank goodness, now only another 3.5km of sandy hills and then I can be homeward bound. There was an aid station at the turnaround along with a few runners mumbling about the sand but I didn’t worry myself with stopping, besides the clock was ticking and I was eager for a good time.

This almost marked the halfway point of my run so I knew I had to pick up my pace, and trailing a slightly quicker runner I tried to keep up.  But before long the same frustrations with the sand had returned and I found myself slowing again. In times like these I remember my coach Marie telling me it’s important to remind yourself to take three deep breaths and to relax the shoulders with every breath to refocus and reset your posture. So.. as she recommended I made a conscious effort to breath in and relax my shoulders with the breath out and to shake out my arms a bit. In the process I brushed my hand past my thigh and felt this sudden awful sting. I looked down but couldn’t see anything but it was stinging so much I had to stop and take a closer look. And there they were three nasty little thorns from a prickle bush stuck under the skin of my leg. “Goddammit” I cursed as I yanked them out impatiently.

Hrm, funny I never felt them go in..? I thought, but no time for that now…I got km’s to run.

There were a few little downhill sections now that I was able to make a bit of ground up and catch up to the runner I was originally tailing and as we both came to a rocky incline I saw she was slowing. It was my chance to overtake and start to pick up the pace. Sure enough, with only 6 km’s left I needed to be getting on.

I scaled up the rocky incline and back down the other side with the same speed overtaking the runner. It came as an absolute joy to be past the out and back loop and to have moved on from the battle with the continually moving sand. Rocks it was and boy was I happy to see them! With a more stable terrain I started to become aware of using my speed on the downhills now, but also to not let my heart rate get too high so that I burned out, I still had a few km’s left and I did not want to conk out before the bitumen.

I continued on up and down a few more little hills, but with the rocks giving me leverage I was able to maintain a good pace and it wasn’t long until I was able to catch a few other runners. It was now I realised that some of these runners were the short course participants who had missed the out and back but were finishing along the same trail.

Now it’s a funny thing to be running reasonably well yourself and to see a first timer struggling. The personal trainer in me felt compelled to lend words of encouragement as I passed, besides that was me last year… walking and wondering how on earth people run the whole way! But the other part of me knows what it’s like to feel cynical and slightly patronised by those who stride on past in all their fast paced running glory saying ‘keep going you can do it’ because I’d always think… ‘yeah easy for you to say.’ So instead I choose not to say anything and rather congratulate the person on finishing and encouraging them when I see them at the finish line. This also seems like a more appropriate time to converse rather than running by with a slurry of incomprehensible words trailing and fading out as your run by.

It wasn’t long before I only had a few km’s to go. So this was it, I needed to start moving up if I could and then finish big just like my coach had always told me.

I rounded a corner and managed to slip pass a few of the guys and then I started to amp it up. I could literally smell the finish when I saw the bitumen and the race volunteers directing runners through. I scaled down a set of steps with quick succession, made a few road crossings, careful to look for cars left and right, and kept on my toes to maintain pace. Finally I saw the green grass coming in to the finish line with no runners nearby. I was glad not to have a mad dash for the finish line but instead I was able to stride over the line with ease and enjoy the feeling of having paced and positioned myself well.

I managed a Personal Best on Sunday and I was glad for it. All my hard work might just be paying off.

Fingers crossed now for a top ten placing in the females for the long distance, but I’ll have to wait for the results to be posted to find out!

So with one race down only four more to go!