Home » Products » Getting a shoe-in on running shoes

Getting a shoe-in on running shoes

Choosing the right pair of running shoes can prove to be an absolute nightmare for the first time, especially if you’re not really sure what you need. But talking to hundreds of people in the gym over the last year about their favourite running shoes, or their brand of choice has led me to believe in three-four major stand out brands.

Asics or Nike, Brooks, and Mizuno.

Now I’m sure there are people out there who will be able to argue this point, and I don’t disagree that it’s certainly a most personal choice and that there are other very good brands out there, but these are just the select few I’ve found to be most popular amongst those who I have spoken to in my area and industry. 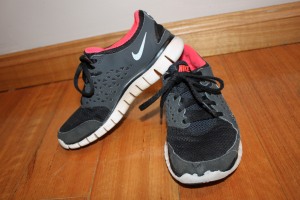 Many moons ago, well before I started running I sported a nice pair of Asics Kayano’s which I have to admit were awesome and much like my current pair of Nike Free Runs. They were a comfy fit, with great cushioning and provided me with the platform to effectively perform almost everything in them. General weight training, small everyday runs, pump classes, spin classes, everything you could think of, they were up to the challenge (with the exception of oly lifting, they were a little too spongey). They were a shoe with a long toe box, but a gel layer to the sole with little to no drop from heel to toe, and about 25mm off the ground compressing up to something like 15mm when I was giving them a pounding. Perfect for what I needed at the time. I equate them to my current pair of Nike Free Runs, like a crossfitter they were good at everything but specialist at nothing.

It wasn’t until they died a well-worn death and I was travelling the Nullabor that I decided I’d go into a well known store and invest in an actual pair of ‘running’ shoes. I was forcibly starting to get in to running because lets face it there’s not much else to do while travelling the desert except play the longest golf course in the world, something I was already failing miserably at and immediately regretted starting but was too determined to quit. 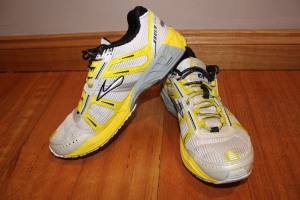 So behold the Brooks Racer S7 4. A ‘lightweight’ racing shoe with a high 30 mm or so cushioned heel, with a 10mm drop from heel to toe. It has moderate grip on the sole, proving it to be useful and comfortable for any flat surface. It has a wide fitting toe box and considering the chunky sole is actually pretty lightweight for the runner. I ran in this maybe half a dozen times before I decided they didn’t fit my small narrow foot and that I wanted something lighter. Plus by the time I got back home I was doing the regular km’s, I was looking to pick up speed, and the heavy feeling sole of the Brooks Racer just wasn’t cutting it.

This was around the same time I arrived back in Perth and discovered the Perth Trail Series. After enjoying the sunsets of the desert, the wildlife at Phillip Island, and lush scenery of the Great Ocean Drive I longed for an adventure that took me beyond the concrete jungle and into the more natural surroundings of lush national parks and what better way to experience that than by running. So, I committed myself to my very first trail running event.

Co-incidentally I then needed a new pair of running shoes to accommodate my newfound passion. After umming 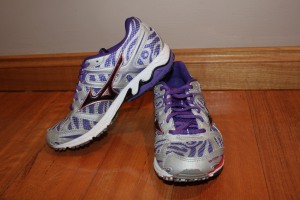 and aghhing about venturing into specialty running store ‘The Running Centre’ (mainly because of the inevitable high prices and my ability to overspend) I bit the bullet and decided I just needed to get the best advice first, and then I could probably source the ideal shoes from Amazon or some other discounted online retailer. Sure enough 40 minutes and a few hundred dollars later I emerged thrilled to bits with a Size 6 pair Mizuno Wave Elixirs 7’s.

Although it initially cost me more than I would normally pay for shoes, it made me realise that being fitted properly and advised on the right shoe for the terrain really does make a difference. Not only were these shoes as comfy as, they were also the lightest shoe I had ever run in, and they had an ideal sole for what I needed, road running, and a coarse grip under the ball of foot for gripping trails as well. 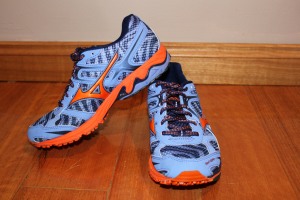 Similar to the Brooks they are a 25mm heel dropping to about 15mm at the front. They have a slightly narrower (is that even a word?) toe box with a hugging feel around the arch and a sole that bites enough on tougher hills, but is soft enough on the downhills to give you a floating on air feeling when keeping pace.

That’s it. Mizuno had suited me well and 6 months later I was re-ordering two more pairs online, plus an extra pair of Mizuno Musha 4 racing flats for the shorter road races I was doing in prep for my longer trail runs.

The Mizuno Musha’s have quickly become my favourite shoes for short road runs, they fit like an absolute glove and although they have little cushioning they are lighter than the Wave 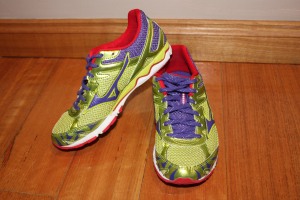 Elixir’s and are like lightning bolts on smooth flat ground. Highly recommended for those who are used to more ‘barefoot styles of running’ and are light, little, and love to go fast over no more than 10kms.

The only concern I had with the Mizuno Wave Elixirs were their longevity. They wore out quicker than I expected, with a hole in the toe being the first sign of wear. Taking into account the pounding I was giving them running 3-4 times a week and a trail event every 3-4 weeks this shouldn’t really be surprising. I also suspect that although they were suited for me, they would not be ideal for a heavier set runner.

I have been told by other taller, and more heavier runners that they most often prefer Brooks. I guess this is because of the wider fitting and cushioning the sole provides because it certainly would certainly lessen the impact and risk of injury for those who are bigger boned and make for a more comfortable experience.

So if you find yourself in a similar debacle, and are not sure where to turn you could perhaps try out a pair of Mizuno’s, however I would suggest going in to a specialist shoe fitting store first and spending the time and money to be pointed in the right direction. It certainly can take the pain and confusion out of what would otherwise be trial and error, I wished I had done this from the beginning, but mind you, I do now have a pretty fantastic and colourful shoe collection. 🙂 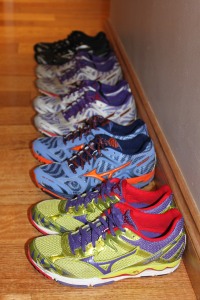