I gulped as we stood waiting as the breadth of what we were about to do sunk in. The whole team stood watching other participants holding onto a short rope, propping one leg up and leaning their whole bodyweight backwards to climb up a flat slippery wall angled at what looked like 45 degrees or more. For those who hesitated and let their legs slip a hard thud onto their bellys or knees would follow along with a collective wince and ‘oooooh’ from everyone waiting and watching. The fallen participant’s team mates would then have to reach down to lift a leg or butt cheek up and over the edge at the top to save them from sliding down. Once at the top safely the triumphant participant would then throw their arms up in victory met by huge amounts of cheering and ‘yeys’ by the crowd.

My eyes flicked from one Zoom Fitness team member to another to gauge reactions as we watched the spectacle ahead. With each ‘ooohhh’, and ‘yeey’ the looks on everyone faces were mercurial. Some had fiery eyes alive and confident with the prospect of giving it a go, while others were wincing, barely peeking through their fingers, looking more worried with every slip and fall as we were getting closer and closer to our turn.

Finally it was do or die and one by one we filtered through being careful to keep our legs in front while scaling the wall until the last minute transition to clamber over the top until we were all safe on the other side. We had done it; everyone had made it over and with all limbs intact!

The massive hay bale tower was next, not ordinary hay bales but big circular suckers stacked three levels high. Ropes and straps held them together and so it was only a matter of getting a leg up over every bale to the top and stepping down the other side. Neither of these things happened easily for me distinctly because of my lack of height. Consequently I resorted to grabbing the straps and fistfuls of hay straps to pull myself up and then without meaning to tumbling awkwardly down the other side to land A over T. Great. 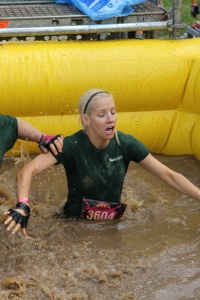 So elegant I was, a mud stained scarecrow with odd bits of hay sticking out from all different places.  Jogging ahead, I suspiciously eyed a water station attendant who dared to squirt us with a hose as we passed. No way Jose! I took the widest berth I could. There had been talk of icy water ahead and I wanted all the body warmth I could get.

150 metres of overs and unders were next. Steel bars erected with black tarpaulin stretched over the upper or lower part of the path depending on whether it was an over or under. I quietly thanked my old weightlifting coach for drilling me over and over with deep squats a few years ago as I made my way easily under the low bars then jumped high over the taller ones. I stopped halfway to catch my breath and spotted David not far behind me, making his way over like it was easy as pie. “There’s a bar in the middle you can use to step over the high ones’’ he stated. Nice! So from that point forward I used the bar in the middle hidden by the tarpaulin to step up and over and conserve my energy for the next part. Yes I could see it now…. the dreaded ice bath. 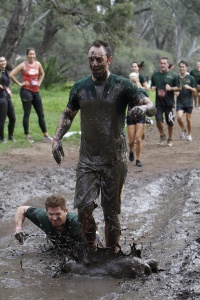 Right, this is it, I sprinted up trying to generate as much body heat as I could for the inevitable shock of the ice water. If there was anything that I hated most, it was this… cold. I propped myself on the edge to do the ol’ toe dip technique, but instead just stared in horror as I saw fresh ice being poured in by the nearby attendant. “No bombing or diving” he called out gleefully emptying the bag of ice. With team mates beside me I knew I couldn’t chicken out so I had to get it over with. Seeing them about to go in, I held my breath and followed suit almost simultaneously. Expletives rang out as I practically froze, and all of a sudden my brain seemed to stop working and all I could hear was Dani well in front of me, gasping loudly from the chill. In an instant I realised that I hadn’t actually moved and my mind quickly played catch up to get my body moving again… wading.. wading like I never had before, and scrambling up the ladder as quickly as I could.

Being out of the ice water and hearing everyone’s girlish screams and colourful words quickly brought a smile to my face as I saw my team mates emerging from the water hugging themselves tight or pulling their shirts away from their skin in disgust. But onward and upward we went to tackle what was by far muddiest and longest run of the whole event.

2kms or so of dirt track and dirty smelly mud pits, some with rope nets to crawl under, others just puddles. Neither stopped the boys sliding through the puddles on their belly’s like penguins on ice and splashing all the girls as they came through until our team slowly became further separated.

After the run, we all met up at the last obstacle, the dreaded 3m wooden wall. No hand holes, no steps, nothing. 3 meters high with only your team mates to help you. When it was our turn we had two of the taller and most physically able guys position themselves to help boost everyone over and the rest of us went up one by one being helped by Justin and Brian sitting at the top. We soon realised that we’d put little thought into how we’d get down the other side of the wall so unfortunately for one of our first members Bec she was left with the only option to jump. Luckily we then got David over next who helped to lower the remaining team members down.

Our last two team members were boosted over by the next team waiting to go over the wall, which for me demonstrated the spirit of the event as a whole, not just amongst individuals, but from team to team. Although some of us hailed from different social groups with different levels of fitness we all became united by the same desire to see each and every person give it 100% and succeed. The event had provided the opportunity for over 6000 people to develop a rare and sudden camaraderie by testing themselves physically and mentally, a feeling that can never be fully explained but only experienced by those who dare to tackle such tasks. For the Zoom Fitness team that meant starting off as strangers nervous about the unknown but ending up as friends bound by the invaluable memories, bruises, and scrapes of having conquered the Western Mudd Rush 2012.